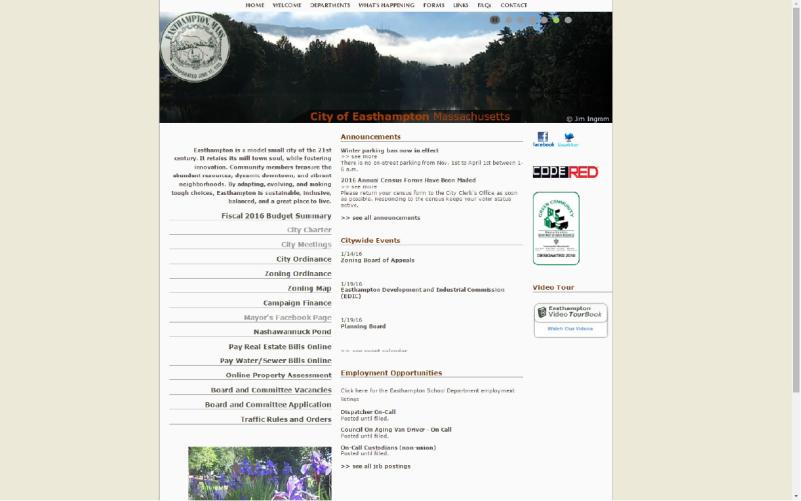 EASTHAMPTON — The city will launch a redesigned website in the coming months that officials believe will be easier for residents and visitors to use.

Mayor Karen L. Cadieux said that officials will also try to increase the number of public documents available online as part of a related effort.

Cadieux on Jan. 7 signed a $6,140 contract for the design and maintenance of a new website with Web-tactics Inc., the 83 Main St. firm owned by Janel Jorda. The work is projected to be completed by the beginning of February, according to the contract.

The new site will replace the city’s current aging one at www.easthampton.org/, which several residents interviewed Tuesday said is difficult to navigate and hard to find important information.

While the website’s plans do not directly call for making more public documents available online, city officials say they are working to rectify the absence of meeting minutes and other documents on the web — which is largely due to staffing constraints.

Barry Small, the city’s systems administrator, characterized the new website as a refresh.

“We are redesigning what we currently have in our website, not adding a host of new functions at this time,” he wrote in a document supplied to the Gazette by Cadieux.

Web-tactics will move all existing material onto the new site, which will include an improved meetings calendar, expanded FAQ section, expansion of some department sections, a citizen feedback box and information on “what our city has to offer as a destination location,” according to Small. The site will be optimized for mobile devices.

Online bill payments will be offered, as will assessors’ property information. Officials are also in the process of rolling out a streamlined permitting process, aided by new software. Applications for permits eventually will be able to be completed online.

The city currently posts meeting agendas on its website, but does not upload minutes or other documents, including the mayor’s proposed budget. Small said he’s working on increasing the number of documents available online. “That’s a high priority,” he said.

Small now stands as the only member of the city’s computer department after a part-time staffer was laid off. That person used to post agendas online, but now the task is up to Small.

And Small said he is talking with city officials about collecting meeting minutes in a more uniform and timely manner, much as agendas are collected. Agendas are due in the office of City Clerk Barbara LaBombard by 3 p.m. Wednesday and then handed off to Small.

The $6,140 website contract includes $5,000 for site design, $120 for a year of hosting and $1,020 for a year of maintenance, which will be paid for from the city computer department’s annual budget.

The contract was awarded to Web-tactics after Small considered a $12,298 proposal from Kansas-based firm CivicPlus, which specializes in government websites.

Web-tactics offered the city a 50-percent “nonprofit” discount, cutting its $11,140 price in half. According to state law, city contracts under $10,000 do not need to be advertised or go out to bid.

Cadieux said she celebrated the choice of Web-tactics because it saves money and allows the city to “buy local.”

She said that the website upgrade is minor compared to the $35,000 initiative undertaken in Northampton in 2013. That process included the formation of a special advisory committee, the solicitation of bids and a final design by CivicPlus.

“This is a day-to-day operation,” Cadieux said. “The funding is just part of (the computer department’s) regular budget, in the same way that he (Small) is over at the Public Safety Complex doing software upgrades.”

While no public forum was held on the site redesign, City Councilor Jennifer Hayes informally collected comments from residents, according to an email she sent to other officials in December.

Residents interviewed Tuesday at Tandem Bagel and Shelburne Falls Coffee Roasters were not concerned about the lack of documents. Several mentioned they were frustrated by the site when trying to find answers to simple questions.

“It was really, really hard to find who to call to get my trash taken care of,” said Heather Salazar, who moved to Easthampton last fall.

Salazar eventually figured out who would haul her rubbish after consulting “several people.”

She added that she would like to see a section on the new website highlighting the city as a cultural destination, an idea that is in the works.

Resident Elise Swinford, who has lived in the city for five months, said she remembers being frustrated navigating the site to find information on local utilities, such as which power company services the area.

“That was really difficult to determine,” she said.

In addition, she suggested that the city focus on making the new website more user-friendly and having pages filled with information geared toward specific populations, such as the elderly and people with families.

Chris Lindahl can be reached at clindahl@gazettenet.com.